My name is Stefane Richards, my husband Alex and I live aboard Amelia Pond, our 66’x12” bespoke Kingsley barge, which we had built by Elton Moss in 2015.

How did you first hear about Elton Moss?

What made you decide to go with an Elton Moss Built boat?

We decided to go with an Elton Moss built boat because although we’d been impressed with Freya, and when we contacted them they seemed interested in the project. We also contacted other boat builders, just for comparison, but Elton Moss were the only ones who had a can-do attitude. Due to my disability and need to use a wheelchair, we had some very specific requirements, Elton Moss weren’t phased by any of them. We were repeatedly assured that either they could do it, had the expertise to find a way to do it, or would work with us to find a way to do it. That impressed us no end! They were also the best value for money. Interestingly, they were the only builders who were prepared to come and meet us, even though we live in the South East and most builders are based in the Midlands or in the North. In fact, they actually suggested it.

How did you find the buying experience / process?

The buying experience and process with Elton Moss was pretty painless. Much of the initial to-ing and fro-ing was done on the ‘phone and by email as that seemed to suit both parties. Once Elton Moss had drawn up plans, we had the opportunity to visit Freya and meet with Elton Moss to finalise the spec and sign the contract. Once the build started, the ‘phone calls and e-mails really took off and we received photos of the build at various points from the completion of the hull. There were many times things were changed as we progressed, either from our end or Elton Moss’s because of my disability needs.

When we came up with ideas, we felt Elton Moss did their best to accommodate them and if they couldn’t, they would explain why it couldn’t, or shouldn’t be done. My husband Alex came up with a great idea for the wheelchair lift, he made a quick sketch which we emailed to Elton Moss, we didn’t know until we had Amelia Pond, that the factory never actually saw the original sketch, but instead had it described to them over the ‘phone. You’d think this would be a recipe for disaster, but the lift is one of the things that really impress people. Not only is it technically brilliant, but it’s really beautiful to look at, and seeing it in motion is quite something.

How have you found the aftersales service?

We have been impressed with the aftersales service. If someone says they’ll call you back, they actually do. On one occasion, we had to contact our aftersales representative late on a Sunday night, of a bank holiday weekend. We expected to leave a message, and possibly follow it up with a text and hope to get a reply before the Tuesday morning. Our initial call was answered and we were patiently taken through what we needed to know. You’re not going to get better service than that anywhere! In fact, one of our friends bought a wide beam barge from another well-known boat builder, not a British one, and the aftersales service has been non-existent. Despite paying an awful lot of money for their boat, the bow-thrusters have never worked and other bits have needed to be replaced very quickly and the company has never returned a single call. At least with Elton Moss everything worked and one thing that was slightly damaged in transit, through no fault of theirs was fixed very quickly and the engineer was flown to England to sort it out, that level of service is rare these days.

What would you say to people who are undecided as to whether a liveaboard lifestyle is suitable for them?

If anyone is undecided about a liveaboard lifestyle, personally, I can’t think of a reason to be undecided, and that’s bearing in mind I have very specific needs, my advice would be to go for it. Hang out on a few towpaths and watch the boats go past, chat to people moored along the canals, most people are more than happy to talk about their boats and their buying experiences. Whether you decide to have a home mooring or to continuous cruise, you are automatically part of a community and you can take part in that community as much or as little as you wish. It’s a fantastic life, serene and beautiful but also fun and full of interesting sights and experiences.7

Is there anything you wish you had been told before deciding to buy a boat?

There are things you should know before deciding to buy a boat, but luckily for me, Alex researches everything to the Nth degree, so by the time we went ahead, he had learnt so much and spoken to so many people, been aboard several boats and asked a lot of questions that we were really well prepared. You should be aware that you will have to either get rid of, or store certain possessions, you just can’t keep as many things as you would in a house or flat, though saying that, we’ve been really impressed by the amount of storage on board Amelia. You definitely want to declutter before you intend to move aboard.

We know some people who basically just went ahead with their eyes completely closed, they have learnt the hard way and the expensive way that doing your research first is essential. We spent over a year in the end really researching and ironing out any little niggles before we went ahead with the build, and even then, before the first weld was made, we made further changes and improvements based on the advice we received from Elton Moss. We think our boat is perfect, we wouldn’t change a thing and we have had a lot of compliments, from friends, family and perfect strangers, those with and without boats.

Would you recommend Elton Moss to people looking to buy a boat?

We would absolutely recommend Elton Moss to anyone looking to buy a boat. You honestly won’t get another builder who will listen to what you really want and actually take the time to understand your requirements and to patiently explain why some things just have to be a certain way or to work with you on things that you might have ideas about. If I knew someone looking to buy a boat, I would say definitely don’t go ahead until you’ve at least spoken to Elton Moss.

What’s your favourite part of your boat?

We’ve been asked what our favourite part of our boat is and personally, I honestly can’t say, there are so many things I love about her, she’s an amazing boat. I think the wheelchair lift and combined stairs is a work of art, but generally, the attention to detail and quality of workmanship is absolutely first rate, we love having a stove, the shower is great, I love having the shutters on the portholes, and windows, the wheelhouse is beautiful, the worktops always get commented on, they are gorgeous and I love the colour of the tiles we chose. Six months in and we still get a buzz from her. 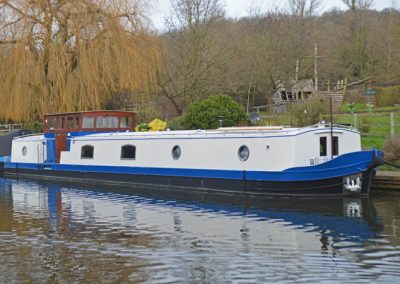 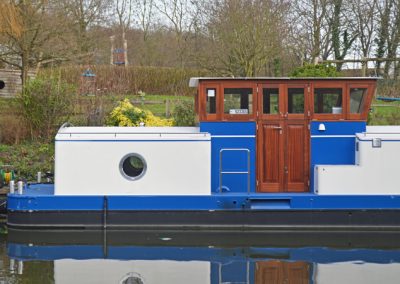 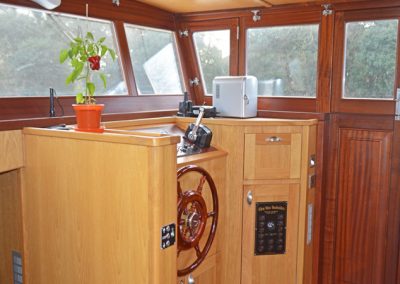 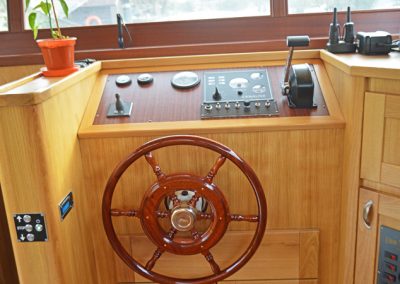 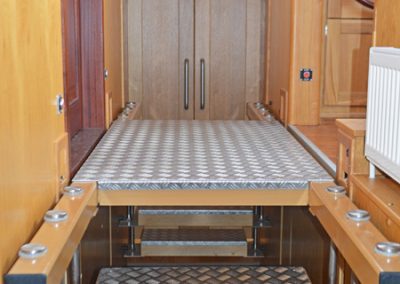 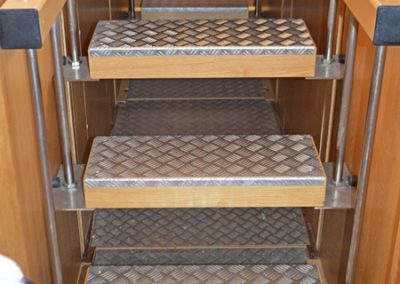 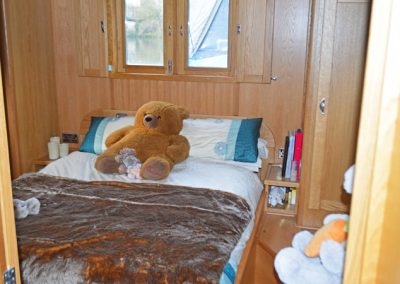 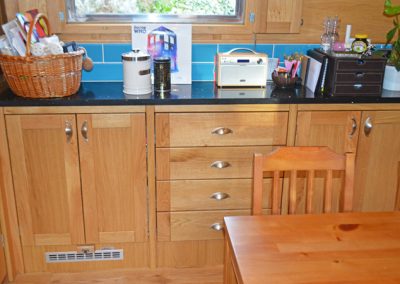 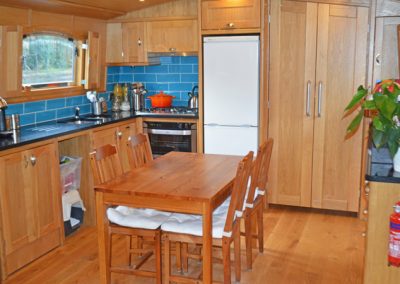 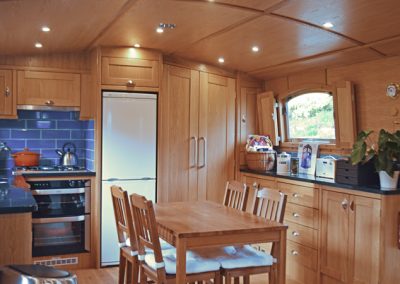 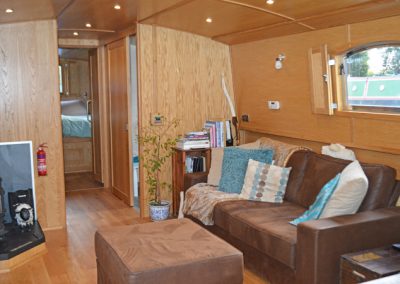 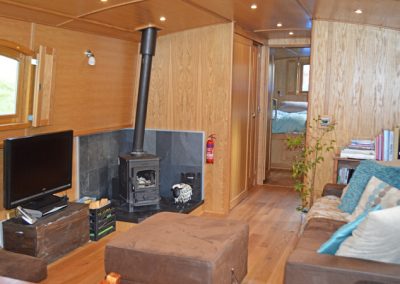